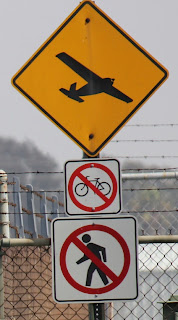 Santa Monica Airport is a part of the City of Santa Monica that residents rarely see and use – and even fewer see it by bike – or envision potential cycling connectivity relating to this space.

This Sunday at the Green Tent, Michael Brodsky will explain the purpose of an upcoming bike ride around the airport.

Learn about the impact of the airport in its current state - air pollution, noise, sustainability, safety - and some surprising alternatives that are being considered.

The FAA contract with the City of Santa Monica ends in 2015. There are residents who feel that the contract should not be renewed. They are beginning to explore exciting new possibilities for the land use that could turn this facility into a healthy benefit for the entire city and region.

Concerns and questions put forward include:
Michael is a member of Santa Monica Spoke, a local chapter of the Los Angeles County BIcycle Coalition. Come share your concerns and ideas - or just chat about bike riding. Learn how you can participate in the SM Airport  bike ride.

Posted by Melissa Stoller at 11:33 PM