...an environmental treasure in our own back yard

You may have heard about the 600+ acres of the Ballona Wetlands just to the south and west of Mar Vista. But have you visited this wild habitat where so many wildlife species and rare plant populations still thrive?   One imperiled bird species that our former neighbor and beloved Councilmember Bill Rosendahl loved, is the beautiful White Tailed Kite, which needs the upland areas where small mammals live just beneath the surface and provide great meals for the Kite, as well as for Great Blue Herons and several raptors.


Drop by the Green Tent on Sunday, January 20, to learn about the Ballona Wetlands Ecological Reserve, which is a fragile mosaic of different habitats: seasonal ponds, wet meadows, salt pannes, sand dunes and prairie grasslands.

AND - learn about the imminent threat to these special lands - there is a plan to bulldoze and excavate the life-rich soils at Ballona, destroy habitat for many thousands of animals and move things around, as if they are decorating the place.

Biologist Roy Van de Hoek (perhaps you know him from the Feathers & Foliage walks in Mar Vista or have seen his Blue Bird houses in our trees) and Marcia Hanscom, Executive Director of the Ballona Institute ,will be on hand to talk with you. Ballona Institute is known as "The Voice for Nature on the Los Angeles Coast."
Click here  to learn more about the treasures at Ballona. And watch this video to see just some of the miracles at the water's edge.
According to the Drawdown data, Coastal wetland ecosystems are one of the top 100 solutions for reversing Global Warming.
Wetlands sequester huge amounts of carbon in plants above ground and in roots and soils below.  Coastal wetlands can store five times as much carbon as tropical forests over the long term, mostly in deep wetland soils.   There are also hundreds of trees on the ecological reserve - as well as grasslands, which have also been discovered to be strong in terms of helping with carbon sequestration - which could minimize impacts of predicted climate change.
Additionally, a methane gas storage field sits beneath the wetlands on our coast - the Playa del Rey Gas Storage Field.  SoCalGas wants to install new fossil fuel infrastructure as part of the ill-conceived plans for the Ballona Wetlands.  So Ballona Institute has joined with Food & Water Watch, Indivisible and other groups like Al Gore’s Climate Reality Project to - instead - close this gas plant down and to do everything they can to protect the sensitive lands at Ballona on the Los Angeles coast. 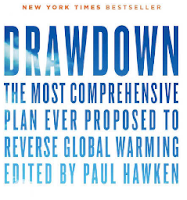 * Photos by Jonathan Coffin
**Photo by Marcia Hanscom
Additional images by Craig Butler
Posted by Melissa Stoller at 10:01 AM